In this paper we describe MacTHESIS, our design system for educational computer simulation programs, which can be executed on Macintosh or on Atari 1040 ST microcomputers (with slight adaptations).

The programs developed with MacTHESIS support the use of the mouse as an input medium (the keyboard is completely redundant), multi windowing techniques, on-line interventions and parallel animation and graphical registration of the simulation results.

An example, built with MacTHESIS: the program LEMMINGEN. You see three windows, pull down menu control tools, animation and graphical output of a virtual fenomena. Verion 4.5.

Many experiments with high educational value can not be executed in the classroom. Some systems are too large (e.g. planetary systems) or too small (e.g. molecular systems) to be studied, others may involve processes which are too slow (e.g. the growth of biological systems) or too fast (e.g. many chemical reactions). In addition to these experiments which are never executed because of scale problems, other experiments are too dangerous (e.g. medical experiments) or cost too much owing to the expensive apparatus required for them (e.g. many physical experiments).

Furthermore some experiments deal with systems which are much too complicated to be fully understood by the students, although it should be desirable if they were able to make simple experiments with the system as a whole (e.g. the national economy).

In most cases the problems mentioned above can be overcome by using educational computer simulation programs. Students using these programs experiment with a mathematical model of the real system by changing the models' parameters. Following this approach the scales of distance and time can be changed, dangerous experiments are executed safely inside the computer and the price of the experimental apparatus does not exceed that of the computer, which is available for other applications as well. Furthermore, educational computer simulation programs can be used to visualise the results of abstract and complicated mathematical models.

In this paper we introduce MacTHESIS, our design system for educational computer simulation programs. MacTHESIS means "Macintosh Technische Hogeschool Twente Educational Computer Simulation System" (the former name of our university was Technische Hogeschool Twente). The system is based on the RLCS-system [2], working on MINC 11 and VAX 11/780 computers and on the THESIS-system working on VAX 11/750 computers. Programs developed with the RLCS-system or with the THESIS-system used two terminals simultaneous. Students using the programs used one terminal to control the program, while the other one was in use for the graphical display of the simulation results. Following this approach a good survey of the simulated experiments was attained and a fixation of the students point of orientation was achieved [3]. JavaTHESIS is our system for web-applications. See other places in this e-Book.

When a program generated with MacTHESIS is in use, the keyboard is redundant. In our opinion the keyboard is a disturbing factor. We advise to remove it before the start of the simulation program. Students use the mouse for all interactions with the program.

The programs are usually provided for on a turnkey floppy disc. Because of this feature, students do not need to bother with the computers' operating system in order to be able to use the program. After the insertion of the floppy disc in the computer the program can be started simply by switching on the apparatus.

When a program developed with MacTHESIS is started three or four windows appear, each one containing either a graph or an animation. The windows are like the pages of a book; all pages showing some dynamic aspects of the same model. Students can always switch from one page to another using the mouse. Furthermore, during run time the pages can be moved and their size can be changed. 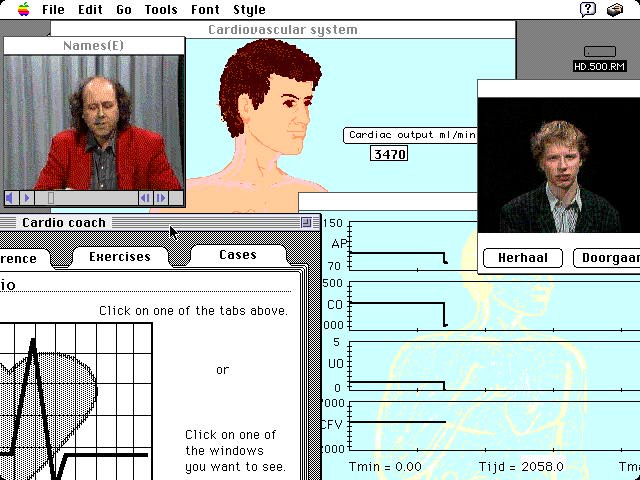 Figure 1. Output of the program CARDIO; A simulation of the cardiovascular system: blood pressure, cardiac output and extracellular fluid volume in relation to some parameters. Version 5.0x.

The active regions in the conceptual model in the animation window are usually indicated by means of dots. The student can change the values of parameters indicated by black dots by clicking in the dots. Furthermore, the student can read the values of the main variables indicated by open dots from the digits presented in the animation window. In figure 1 the animation window of the educational computer simulation program CARDIO is shown. A diagram of the human body represents the simulated system. In this program the main variables are the mean arterial blood pressure and the cardiac output, whereas important parameters are the strength of the heart muscle, the constriction of the venes and the renal mass. Students intervene in the model by clicking in the black dots indicating the position of the heart muscle and other relevant organs. After this action a window appears in which a scrollbar is drawn. The student can change the value of the parameter clicked in by moving the scrollbar, using the mouse. We call the design technique using this type of representation of a simulated system the input-animation-technique. The application of this technique enables the students to interact with the models in a manner very similar to the way they would interact with real situations.

Parallel to the animation window up to three other windows can be present in which time registration of the main variables takes place (fig. 1.3). We call these windows the registration windows.

The programs provided for are used in combination with a program manual. The only purpose of this manual is to explain the control of the program. Separate paper instructions with information, exercises and cases are used to guide the learning process.

Programs developed with MacTHESIS (and also JavaTHESIS), however, are very flexible and allow the teacher to overcome the problems mentioned above by adapting the learning environment. The quantity of text used by the program is reduced to a minimum. All the text used by the program can easily be adapted or translated because the text in the executable programs can be edited with a separate resource editor (ResEdit) and the graphical editors MacPaint and PixelPaint. These editors enable the teacher to adapt the program, even after compilation and linking. The educational simulation programs are meant to be used in combination with information and instructions provided on paper. The teacher can develop his own materials or select from existing educational materials. In this way the teacher can create an optimal learning environment which conforms to his educational philosophy and in which the text is consistent in all educational materials used by the students, including the simulation program as well as the paper materials.

There are a lot of versions of the MacTHESIS design system: