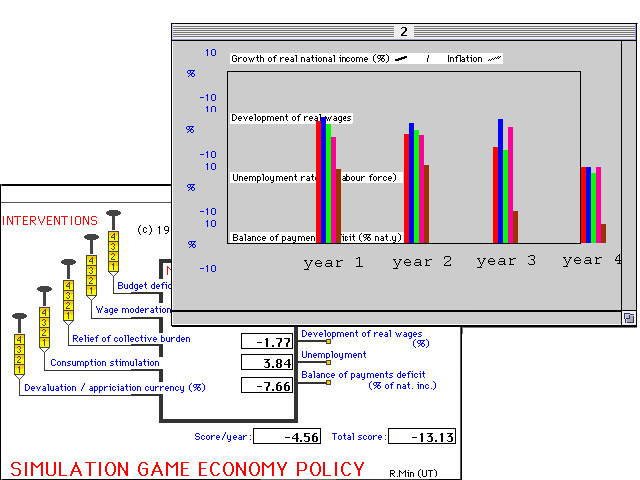 Here you see a simulator about the Dutch economy with 'two parallel windows'. The user can learn how an small open economy runs. The instuctions, the exercises, the tasks and the manuals are somewhere else in the e-learning environment.

a) To be aware of the defining characteristics of the major categories of simulations for learning-related processes (trainingsimulatoren, inzichtstrainingen, vaardigheidstrainingen, bedrijfstrainingen, etc.)

b) To be aware of major examples of such systems in use in the field, of the theoretical principles (of learning with them) most important to the design of such systems, and of design and development methodologies being used for such systems.

c) To become familiar with examples of such systems that have been designed and developed, comparing the examples with the general characteristics and other major examples.

d) To gain insight into the ways that the TO designers and developers of the example cases translated and applied design and developing theory (the PI-theory).

f) To develop a web-based simulation (a Java-based applet) (incl instruction, exercises, cases etc.) with simple-in-use tools (without learning all about Java).

Summery: In many learning environments only traditional texts, pictures, videos, and animations are used. In e-learning environments case-based simulations and simulations of virtual phenomena are also possible. In many cases virtual phenomena are described by mathematical models. This course focuses on some of the theoretical background of simulation and models, and practical knowledge about how to utilise this background. Appropriate methods and techniques for designing and developing these simulation components is very important. Attention will be given to the development cycles, procedures, theories, simple-to- use tools, and expertise needed to appropriately realize educational websites involving simulations. Cases and models will be provided for use in simulations. The course also gives insights to some of the cognitive background relating to simulations, such as the split-attention effect, the cognitive-load theory, and the dual-code theory and relates them to the parallelism concept and the Parallel Instruction Theory for task-oriented environments. There are 7 theoretical lessons and some practical events in the computer rooms (see teleTOP).

Part 1: The texts: papers and/or chapters of books

Part 2: The organisation and paractical part of the course